by Dr Sanjay Lunia
in Business
0

The best Pre-school in Ballarpur Creative Minds Pre-School, Ballarpur run and
managed by Crescent Shikshan Prasarak Mandal, Chandrapur of Maharashtra organized a trip
for the pre-primary students to the Fire Station, Police Station, and Court on 17th of November
during School hours so that the children could learn about how important Community Helpers
are.
Creative Minds Pre-School kids were briefed by Judge Hon’ble Shri Tushar Wajhe Sir
and Judge Hon’ble Shri Pushkar Joshi Sir on how and what is the basic structure of the Civil
and Criminal Court. The kids were distributed Chocolates by the staff of the Court who took
the kids to the different places of the Court and briefed them about it. The kids felicitated the
Judges by giving flowers.
The kids also visited Police Station were Shri Umesh Patil sir, Police Station In-charge,
Police station Ballarpur along with the staff briefed the kids about the role of the Police in
catching the thief through a short story and were briefed by the Police officer on how to contact
the Police in case of an emergency by dialling 100. 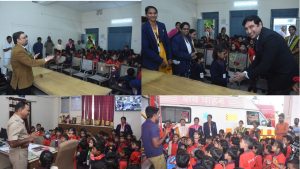 This outbound trip gave students an idea about what to do and how important it is to use their
presence of mind when a crisis like this occurs. They also understood the importance of the
Judicial System, Police, and firemen and how difficult it would be if these people are not there
to help us when such a need arises.
The Outdoor trip was organized under the guidance of Principal Mrs. Humera Khan,
teachers of respective classes Mrs. Sarika Meshram, Mrs. Beula, Mrs. Ujwalla Khobragade,
Mrs. Parul Bharne, and Mrs. Sanshya Appalla along with Mr. Riyaz Khan. The teaching and
non-Teaching Staff worked hard for the successful and smooth organization of the trip. The
officers and the staff of the Civil and Criminal Court at Ballarpur, Officers at Police Station
Ballarpur, and the fireman helped with the successful organizing of the trip

GEWINN WACHSTUM Scale up its portfolio

The John Deere-Navarro College Technical Program was introduced at NARFE