The Rangers, hoping to escape the chaos, travel to confront the Twins 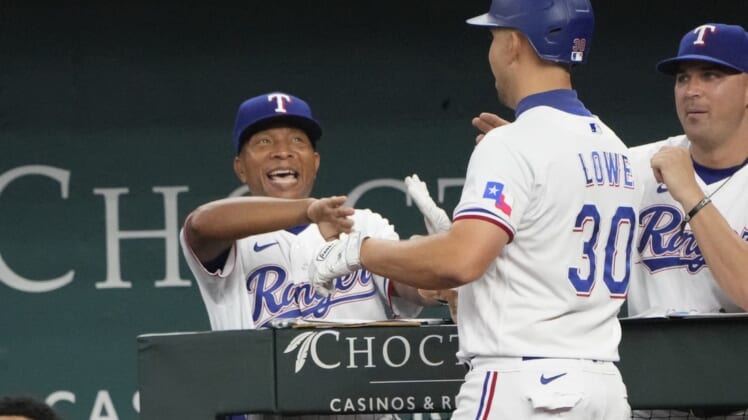 After a four-game home stretch that saw Texas fire its manager and front office boss, the Rangers were eager to hit the road for a six-game road trip that begins Friday night in Minneapolis against the Minnesota Twins.

Rangers manager Chris Woodward was fired before the series opener against the Oakland A’s on Monday, and longtime president of baseball operations Jon Daniels was shown the door two days later.

The flight north was made even sweeter when the Rangers won a split of their chaotic series with the A’s, cruising to a 10-3 victory on Thursday afternoon. Nathaniel Lowe hit a three-run home run in the fifth inning to help break the game open and shortstop Mark Mathias added a single for the Rangers.

“Today was fun,” interim manager Tony Beasley said after improving to 2-2 since replacing Woodward. “I think the whole day was a much more relaxed atmosphere.”

“Everybody’s in a place where there’s so much going on,” Lowe said. “There are human beings behind the faces you see on the field. To be able to clear that up, have a good flight, hit the road, have a long streak where we can hopefully get a few more W’s will be good for the team. We just have to keep getting better moving forward.”

Left-hander Martin Perez (9-3, 2.79 ERA) will start the four-game series opener with Minnesota. The Rangers close out their two-game road trip in Colorado.

He pitched a no-decision on July 9 against Minnesota at Texas when he allowed six runs, including a three-run homer by Jose Miranda and a two-run shot by Gary Sanchez, on seven hits over six innings in a 9-7 Rangers win .

Minnesota, which swept a three-game sweep of Kansas City to start a seven-game homestand, had Thursday off but still won on the road. An MRI revealed that starting pitcher Tyler Mahle had no structural damage to his throwing shoulder and is day-to-day with “general soreness and fatigue.”

Mahle, a key acquisition from the Cincinnati Reds, left Minnesota’s 4-0 win over the Royals on Wednesday after pitching 2 1/3 hitless innings. The Twins were concerned that Mahle, who averages 94.3 mph with his fastball, was regularly hitting the 88-89 mph range Wednesday.

He previously had an MRI on his shoulder in July in Cincinnati that showed irritation and inflammation.

“Mahle is struggling with his shoulder for a back-to-back start,” said Minnesota reliever Emilio Pagan, who pitched a two-inning scoreless win on Wednesday. “He is a fighter. I think he wanted to stay in the game, but it’s probably best for our team to sit him out and move forward and make sure he gets enough rest and treatment going forward.”

Bundy is 7-2 with a 3.45 ERA in 12 career games (10 starts) against the Rangers. He won his only start against them this season on July 10 in Arlington, Texas, when he gave up four runs on six hits over five innings.

As cannabis products evolve and strengthen, business owners in Tennessee are looking for more regulation

As cannabis products evolve and strengthen, business owners in Tennessee are looking for more regulation

‘Progress seems to be in reverse’: How fashion fell in love with the curve | Fashion

Tennessee won 52-49 on a last-second shot to close out the Alabama win.