Westwood-based fintech company Sunbit is entering the payment card industry with the introduction of its no-fee credit card, which will compete primarily with buy-now, pay-later firms such as Klarna, Affirm and Sezzle.

In addition to standard credit card features, the Sunbit Card offers customized APRs to approved users and allows them to pay individual transactions in full or on three-, six-, or 12-month payment plans. There are no annual fees, application fees, late fees, or penalty fees—nor are there fees to add or remove a transaction from a payment plan at any time. The card is managed through the company’s MySunbit app.

“I think what we’re trying to achieve is to have the best of all these different (payment solutions) all together in one card with no fees and a mobile app that does all the heavy lifting for you, ” Bill Walsh, Sunbit’s chief customer. the officer said. The card is issued by Utah-based TAB Bank pursuant to a license from VISA.

So far, Sunbit Card has reached more than 65,000 early access cardholders and has an additional 400,000 consumers on the invitation list. 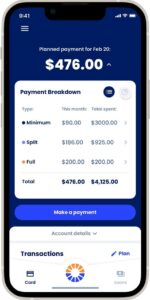 Still, there’s a lot of ground for the company to cover, according to CEO Arad Levertov, who said Sunbit’s goal is to expand its card acceptance. According to a report from financial analysis website pymnts.com, the United States business market consisted of nearly 29 million small and medium-sized business owners in 2020.

“There’s a huge merchant base there, and Sunbit has a small market share,” said Dave Maddox, a payments industry consultant with independent payments consulting firm Thinkpayments and retired business development leader at IBM. “They’re targeting the subprime market, which is an underserved market, no doubt.”

Maddox added that buy-now-pay-later (BNPL) services and companies gained significant traction during the pandemic, when subprime card users were more likely to be out of work and unable to qualify for a credit card. Since then, BNPL transaction volumes have fallen, with companies such as Affirm losing more than 75% of its value since this February. Affirm’s stock trades at about $35 these days, a far cry from late last year, when its stock was trading at more than $160 a share.

“The way (Sunbit is) targeted seems good to me, at least in the fact that they’re focused on individual segments where subprime consumers would have trouble and need to finance something,” Maddox said, using auto dealerships. as an example a place where consumers may encounter unexpected financial problems that can be helped by Sunbit’s offers.

Filling in the blanks

The Sunbit Card took more than two years to develop, according to Walsh, who said the company spent a significant amount of time researching what gaps in personal finance its card could fill.

One issue found in Sunbit’s research was that more than half of the customers in the study had multiple checking accounts used to handle different purchases.

“I think when we started seeing these common themes with the personal finance life hacks that clients were doing to make it all work, it inspired us to go down that road and feel like we were on to something,” Walsh said. .

However, Walsh added, Sunbit faces a big challenge if it wants to grow the card’s user base: rethinking how a card works in an industry in which there is a legacy card-based technology that consumers are familiar with. known

Convincing consumers is only one piece of a larger puzzle, according to Maddox. He said that successfully pushing the product to merchants over competitors will be a challenge, as merchants are likely stuck with a financial solution to juggle multiple platforms from different companies.

How Sunbit structures its merchant agreements, which are extensive and detailed documents, will also be a determinant of how successful the company is in persuading merchants to adopt its services, according to Maddox.

Maddox said that if he were to invest in the company, he would want to better understand Sunbit’s projected loan losses, actual loan losses and how it plans to get more merchants on board. “They’re going after the subprime market with a credit card, which makes it even more challenging to figure out what (their) potential credit losses might be,” Maddox said.

Levertov said that Sunbit’s advantage is that it has collected a lot of data in the last six years of business. “There’s always a challenge when you give credit, but we’re confident in our ability to measure it and overcome it, because that’s what we’ve done over the years,” Levertov said.