The two-day pilgrimage is the brainchild of Greg Wood, a parish priest of the San Buenaventura Mission Basilica, along with his wife Mary. He started the first one last year as an “opportunity for a public testimony to our faith and the goodness of our beloved … ‘father of California’.”

“In light of all the desecrations of [St. Junípero’s] statues…and defamation of his character and good works, I felt called to publicly honor Saint Junípero Serra…by organizing a walking pilgrimage that would literally walk in the saint’s footsteps,” said Greg . “This would allow us to continue the saint’s mission to evangelize California.” 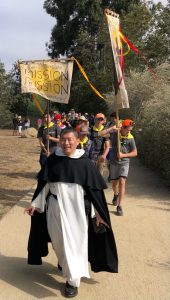 Pilgrims carried flags and banners with the image of Saint Junípero. (Courtesy Walking Pilgrimage to St. Junípero Serra on Facebook)

The first pilgrimage attracted more than 150 people. This year, their number was even higher. Several Franciscan friars of the Renewal joined the pilgrimage, providing music for the journey with guitars, drums and violins.

Travel Photography Starter Kit: What, How and Where?

“There is something really powerful about being able to walk directly in the footsteps of this saint … especially as a Franciscan friar, to be able to walk in the footsteps of one of the brothers who had gone before us,” said Brother Sean Paul Wood. CFR, who flew in from the Bronx to join the pilgrimage. “The kingdom [was] released on State Street in Santa Barbara.”

Pilgrims met Saturday morning at the Santa Barbara Mission for a Mass concelebrated by several priests from LA, several from Denver and one from Portland. Father Dan Laki, a friar at Mission Santa Barbara, blessed the pilgrims before sending them on their way. 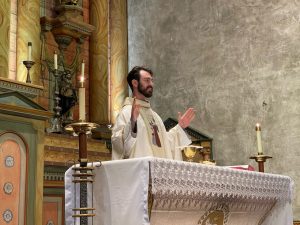 The pilgrimage traversed downtown Santa Barbara, across the ocean, along the boardwalk, through Montecito and Summerland, ending the first leg with a dinner at St. Joseph’s Church in Carpentaria. After the holy hour and the confessions, the pilgrims set up tents to rest on the second day of the walk.

On Sunday, pilgrims used bike and pedestrian paths along the coastline, following in the footsteps of Saint Serre. Because this is a jubilee year in the Archdiocese of Los Angeles, pilgrims had the special opportunity to gain a plenary indulgence by walking through the sacred doors of the San Buenaventura Mission Basilica.

The pilgrims concluded their journey around 6:00 pm on Sunday night with mass and a dinner hosted by the Knights of Columbus. “Arriving at that final stretch, we were singing, dancing, walking down the main road to the Mission and the bells started ringing,” said Brother Sean Paul. Another pilgrim, Ed Gonzalez, “broke down in tears” when he finally completed all 35 miles. “I couldn’t believe it. They weren’t tears because I was happy that the 35 miles were over, they were tears of joy that I was able to experience [this] and offer this sacrifice with all present and tears of sorrow that we are done.”

It was an exciting journey for those who joined, but also for the people they met, he said. At one point, a woman stopped the friars and asked them what they were doing. When brother Sean Paul told her about the pilgrimage, he said, “she just burst into tears.”

“Deep down people want something to live for, something to celebrate,” he said. Pilgrimage “was a microcosm of life, of pilgrims traveling to Heaven. We are in this together. ”

To my friends and industry partners: Breathe easy: Travel every week