Great opportunity in the world of fashion forward

Most first-generation Pakistani immigrants living in Italy have limited education and training. Most of them are stuck in low-income activities such as fruit and vegetable picking, livestock handling, working as unskilled or semi-skilled workers in factories and often selling trinkets on beaches during summer. However, second generation Pakistanis are breaking free, building new lives and achieving success.

Farwa Zulfiqar arrived in Maserta Italy in 1995 when she was five years old and moved with her family from Burewala near Multan. Finding herself in a new country, unable to speak a word of Italian, she was scared and confused, afraid to even leave the house. In elementary and middle school, she struggled to learn Italian and make friends. She often felt isolated and isolated. Shortly after 9/11, when she was just 11 years old, Farwa began facing racist attacks. Her classmates mock her and call her a ‘terrorist’ and say, “Why don’t you go back to Afghanistan?” They started saying hurtful things.

But hard work and the strong support of her family helped her overcome countless difficulties. At 14, she enrolled in the local art and fashion school and graduated top of her class; Many of her creations were featured in the school’s end-of-year fashion show. She then earned an upper division degree in fashion styling from the Academy of Fine Arts in Macerata. After two years of hard work building her portfolio, she now works as a fashion stylist in Milan – one of the world’s top fashion capitals. Although she is still working to establish herself in this niche, she is being called by various agencies working with high fashion houses. She has launched her own fashion line of high-quality, eco-sustainable children’s clothing.

I met Farwa through a mutual friend. I’ve been doing a series of articles on the Pakistani diaspora in Italy, specifically documenting success stories – stories of people who have made a new life here and never resented the old country forever. However, most of the interviewees I have interviewed are men, and despite my best efforts, I have not been able to identify many successful women.

Young Pakistani women in Italy often find life difficult. There is little family support for education, social restrictions, and work outside the home is often frowned upon. And then there is the question of marriage – many families have a strong preference for marrying off their daughters to cousins ​​or other close relatives in Pakistan. This serves two purposes – the girl is ‘safely married’ and at the same time the boy gets a visa to legally immigrate to Italy. If young women rebel against such arranged marriages, they are beaten and harassed by their families. In some cases, such violence has even resulted in honor killings.

How did you come to Italy?

My father was an art teacher at a university in Pakistan. He came from a family of accomplished professionals but had little luck as an artist – either as a teacher or as a practicing artist. In the year He left Pakistan in the early 1990s and worked as a house decorator in Paris, where his brother lived. Then he went to Milan and Rome. He does false ceiling and stucco work as well as painting. Combining skilled hands, attention to detail and a strong work ethic, there was much demand for his service.

Traveling through Italy, he somehow reached Macerata in the Marche province of central Italy. Marche is famous for its shoes and many famous brands like Tods are found there. There are many rich people who own beautiful apartments and villas. My father started working with a high-end home improvement company. The pay and the promise were enough to ask his family to join him.

Why did you choose to study fashion and design?

When they came to my school during the orientation visit, I heard for the first time that there is such a thing as a school of fashion and design. I saw some sketches, photographs and the materials they brought with them. It was like a magical world and it was love at first sight. From that day on, I knew I wanted to be a fashion designer.

Looking back, I think my love for fashion is a reflection of who I am – a combination of my mother and father. My father is an artist and his work is related to color, material and form. My mother sewed clothes for the family and there was always a sewing machine at home. Also, textiles and clothing are in our blood. Burewala has a long association with textiles. Burewala Textile Factory (named as Lawrencepur) – is the largest textile factory in Pakistan. The area is known for its embroidery, which most women learn at a young age.

In high school I finally ‘found myself’ and I wasn’t the only foreigner in class. More importantly, I was a star student. I know how to measure, cut and sew after helping my mother with her sewing – most students had to learn from scratch. I loved the design work and I used to work on my drawings for hours and hours. I passed my course with a final grade of 94% – quite an achievement for someone who could not speak any Italian a few years ago.

How did your family support your decision?

Support was provided from various bodies.

My mother only had a matric pass but she always said she wanted her children to do what she couldn’t – study and go to university. My father was also totally supportive. And there was no difference between men and women. My elder brother went to university to study engineering. I studied fashion and design; My sister is now finishing her art studies and will start university this year.

He came from Burewala with the support of my aunt and her husband. He is the judge and she is the doyen of the family. They have four daughters, all of whom have gone to university. They would tell my siblings and I about our plans and aspirations, give us advice and encouragement when visiting Pakistan.

What did you do after high school?

After high school, I wanted to go to Istituto Marangoni in Milan. This is a top design and fashion school in Italy. I was sure that I would be able to get in with my grades and grades but the family could not cover the school fees and living expenses in Milan. It was a big disappointment for me. My father tried to comfort me by telling me that success depends more on how hard you work than what school you attend. At that time, I did not understand the meaning of the words – now I am married.

I enrolled for a three-year degree course at the Instituto delle Belle Arti (Fine Arts Institute) in Macerata. My specialization was fashion design but I also studied photography, leather goods, jewelry and color design.

I work very hard and am never afraid to take on new challenges. For example, I was one of the few who mastered the moulage technique – this is where you make the dress directly on the mannequin or model. The technical advantage is moving from design to display very quickly. But to do this, you need to have a very good feeling for the materials you use.

And after your degree?

The main thing was to create a work portfolio. Sketches, photos, videos – things that show customers what you can do. I was lucky enough to enter a national competition for young stylists. To participate, I had to prepare a mini collection or capsule collection of 12 pieces. I worked very hard on this, to create a unique look that combines both East and West and to make dresses. We used very simple transparent fabrics and traditional embroideries that we have done at Burawale. My mother was always by my side and we often worked through the night.

I made it to the finals in Rome and won the ‘Critics’ Award’, which was more important than the ‘Popularity Award’, which was professionally voted on by the public. As an award winner, my pieces went on sale in a very popular concept store in Milan where they sold out within a few weeks. This success led to other opportunities such as to talk about my work on national TV (which I accepted); And an offer to appear on a reality show (I turned it down but did let them use my designs and dresses).

I also worked with Armena Khan as a stylist during the shoot of Sherdil in Pakistan. It was a very interesting experience. 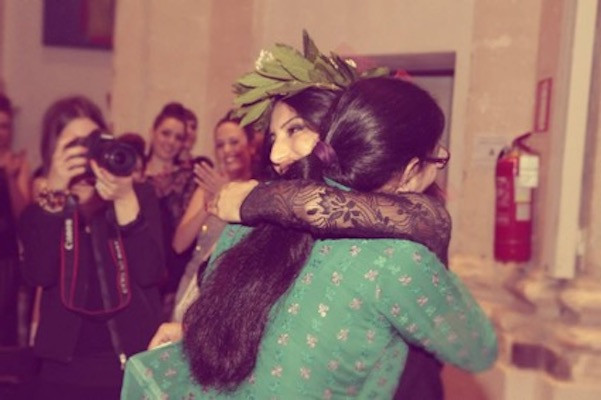 And when did you move to Milan?

In 2020, I decided I was ready to leave Maserati and move to Milan. I told my parents who were naturally surprised but supportive. I rented a small apartment and had to work odd jobs to pay the rent. However, I always tried to work in my sector. For example, I would rather work as a shop assistant in a high-end fashion store, even if the pay is low.

I slowly started to develop an interest in my work – I was lucky enough to work with many very talented people in the fashion business, such as photographers and videographers. We’ve produced a lot of material and built an impressive portfolio.

What are the major ongoing and planned projects?

I recently launched a line of eco-friendly children’s clothing. In the beginning I mostly sold online but now many boutiques carry my creations. I hope to launch other clothing lines in the near future.

What advice would you give to young women of Pakistani origin living in Italy?

As migrant women, you face problems. There are incidents of bigotry and racism. These are likely to increase in the coming years as several major political parties adopt anti-immigrant rhetoric, blaming immigrants for crime and stealing jobs. You have to be brave and face these problems. Remember that most Italians are not prejudiced and that honest hard work will eventually lead to success.

As women you may face problems here in Pakistani society and maybe even from your family. They may find it difficult to accept your economic and social independence and there will be a painful double standard in the treatment of men and women.

But whatever happens – don’t give up on your dreams.

Dawood Khan is a freelancer in Italy. All information and facts are the sole responsibility of the author.

Travel back in time with Preston County History Days