BP Sydney backs solar startup 5B with $55 million Series B

Energy giant BP’s venture capital arm has committed $20 million to close a $55 million Series B round in Sydney solar array startup 5B.

The additional funds from BP Ventures complete a 15-month capital campaign that raised an initial $30 million in June, with the round led by existing backers AES Corporation and Artesian Ventures. The two VCs provided an additional $5 million in the latest round, along with BP Ventures. Former Prime Minister Malcolm Turnbull and climate campaigner Simon Holmes à Court are among 5B investors.

5B has developed a rapid deployment system for solar panels — it doesn’t manufacture them — called the 5B Maverick, on specially designed frames that hold up to 90 panels. This year, the 5B Maverick was used by a team of just 10 at AES’ Andes Solar II B facility in the Atacama Desert in Chile to deploy 1.1MW of solar systems in one day – the size of a football field.

The system is now located at 100 sites worldwide and has a generating capacity of over 60MW. 5b has been tipped as the preferred option for the massive $30 billion solar cable project in the Northern Territory to supply Singapore with renewable energy. 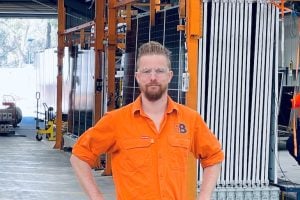 5B co-founder and CEO Chris McGrath

5B CEO McGrath said BP’s venture capital will help the company’s global expansion plans, including a manufacturing and assembly center in North America.

“It is very encouraging to see BP’s transition and we look forward to working together to accelerate its efforts. “Partnering with BP Ventures and BP Businesses gives us a wealth of global business and operational expertise,” he said.

“It provides a great opportunity to deploy our 5B Maverick technology in various global markets. The backing of such an active and experienced venture capital team is a strong validation of our technology and ability to support bp’s transition into an integrated energy company.”

BP Ventures chief Jonathan Stone will join 5B’s board and will work collaboratively with other BP business units to drive growth, he said.

“This agreement is an excellent example of BP investing in a business that supports the growth engine of our renewable energy transition. And is another line of our Multi-Energy Vector Country Strategy that supports the decarbonisation of energy in Australia.”

BP’s gas and low carbon energy business and 50-50 joint venture Lightsource BP are looking to use 5B Maverick systems on their projects.

Here’s what flight attendants want you to know about flying

If you love ugly UVA and Tech ACC football, this was your week!