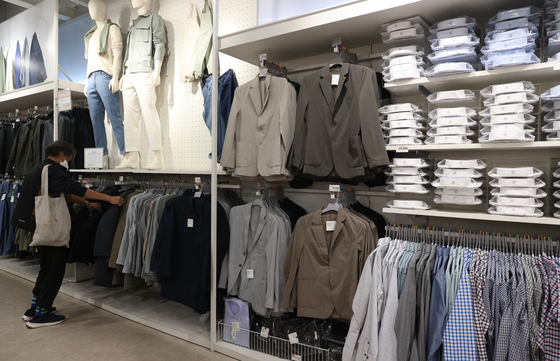 A shopper browses clothes at a clothing store in Seoul on April 13. [YONHAP]

The lifting of social distancing measures in April boosted the fashion industry as more people ventured out and hurt furniture and interior decoration companies, which thrive when people are stuck at home.

Revenues at major fashion companies grew by 75 percent in the second quarter, and the second quarter is less profitable because summer clothing has lower prices than fall or winter clothing. But this year, the rate has increased as people return to offices and restaurants after lifting social distancing measures.

Shinsegae International’s sales rose 12.7 percent to 383.9 billion won, while net profit rose 74.6 percent to 33.3 billion won. “These results were a reentry benefit. consumption of clothing due to the rise of social distancing,” said the spokesperson.

A spokesperson for Handsome said: “As a result of the reopening, demand for clothing has increased and sales of outdoor and sportswear have been very strong.”

The company said its profit was down slightly due to new business ventures such as the launch of a new perfume line.

“This is our highest performance in the second quarter,” Colon Industries FNC official said. “As the number of new golfers increases, the performance of our golf apparel product has grown exponentially.”

There are mixed forecasts for the second half. Some expect equally buoyant results, while others say that business may stop due to high inflation.

On the flip side, furniture and interior decoration companies performed poorly in the second quarter.

Demand for furniture and interior design increases as people move or buy new homes, but housing transactions have slowed due to rising interest rates and lending regulations. Rising raw material prices and rising logistics costs are contributing to the deterioration in the profitability of furniture and interior products.

For the furniture and interior decoration industry, there is optimism for the second half.

“We expect earnings to improve with measures such as easing regulations on first-time homebuyer loans and deferring and suspending the transfer tax for people who own more than one real estate property,” a Hansem spokesman said. .

“By expanding our overall domestic distribution network and strengthening our overseas premium furniture lineup, we will return to profitability in the second half of the year,” said a Hyundai Livart Furniture spokesperson.

Sandy Makes Second Round of Layoffs, About 20% of Remaining Employees Affected • TechCrunch